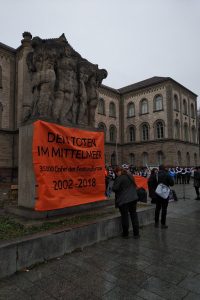 My dear people of Gottingen! Today we gather to speak loud in one voice to tell the refugees who are trying to escape war in the countries passing through Mediterranean that WE ARE WITH YOU! We feel your pain and We know your sufferings. It is about time the EU reconsiders its cruel border crossing policies that push back the innocent refugees to hell.

I myself being a refugee from war-torn Balochistan have seen war, bloodshed and chaos. Trust me, it is the worst feeling a human being can have. If I was never allowed to escape and reach here, I would have been long dead or missing. Who knows.

Today I feel lucky to make it alive in this beautiful environment. The love and respect I have received is beyond words. And I want the same for all refugees. I stand here and ask the European Union leadership to ask their conscience, would they keep their doors shut for the helpless victims of wars? The men, women, children and old? Would they leave them die on their way through the Meditereanean Sea??

We Say Open the Doors!

We Say Let the Refugees Come!

We Say Let the Lives be Saved!

EUROPEAN UNION! YOU CANNOT IGNORE OUR VOICES! OPEN THE DOORS FOR THE REFUGEES!